We are applying for 2019 Mobile Thermal App Challenge for FLIR products.

We started to play with FLIR Lepton thermal data WiFI transmitting ESP8266 to iPhone in 2017. 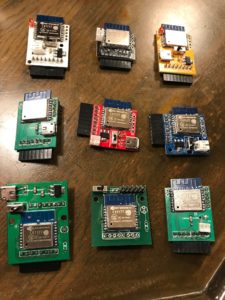 We spent time and money for try and error for software and hardware a lot since we are not professional for this kind.

for my business, we check our own PV sight with this system.

it was fine with us but my friend, who is playing with deep learning combined with Yolo with this data(coco data). it works like this. 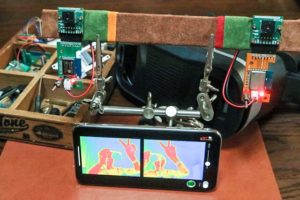 Why we are developing this ? to start with wireless, handy and ultra-light system for thermography. now adding deep learning with it seriously.

now we are making Pre-learned models for thermography data.

Although we try with FLIR Pre-learned model but not really work well, we add original Pre-learned data and we are making our original system, wireless, handy and ultra-light system with Yolo v3 not only Lepton but also BOSON, which based on our Lepton system.

Upto September 2019, we have been using NVIDIA Jeston(TX2, Xavier and Nano), which never be handy but we have completed our system Toy ADAS. 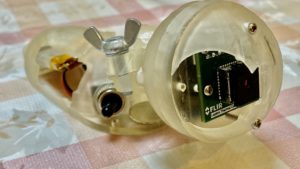 I have chance to show this system to FLIR marketing manager Mr.Greg Nagler in Tokyo this may.

He advised me this system to promote BtoC, such as developers and high-amateur but not BtoB.

and name should be Kansai Thermal Cam never be Thermal camera, which will be hit full of Chinese products and can not find our system, who is looking for our system via web.

this challenge is also our greatest opportunity to show our systems many developers, who want to use thermography with deep learning.

For business ? money ?, We are playing with Lepton and BOSON with Fun and share with others(not too many pull request).

at the moment, we found it difficult to combine with FLIR developer kit, which is condition of this challenge.

Rather Apply rise more difficulties to apply for iOS apps with this system at the moment.

never mind we will play with them more anyway.

Now a professor ask us to develop to detect elderly fall down with thermal cam system at hospitals or care house.

so we are working with him at the moment.

Cornell universal are studying this kind with a stereo cam but his point is not to use camera due to privacy issue but thermal cam can not identify the person but can detect elderly fall down there.

We are trying to clear apple regulations at the moment and need some more time.